The Territories of the Covid-19 Response in Lebanon

Lebanon, Pandemic
The times of Covid-19 are times of crisis and, like any crisis, these times are most often used as an opportunity for political actors to reposition themselves. At the Beirut Urban Lab, we chose to look at how, in the context of Lebanon, and in the aftermath of the October uprisings, the response to the Covid-19 impacts and reconfigures the political geography landscape.
This project documents 538 actors’ responses to the pandemic in Lebanon over the March-July 2020 period. We compiled data from media outlets (TV, newspapers, e-zines), social media (Twitter, Instagram, Facebook), websites, and more rarely, personal observations on the ground. 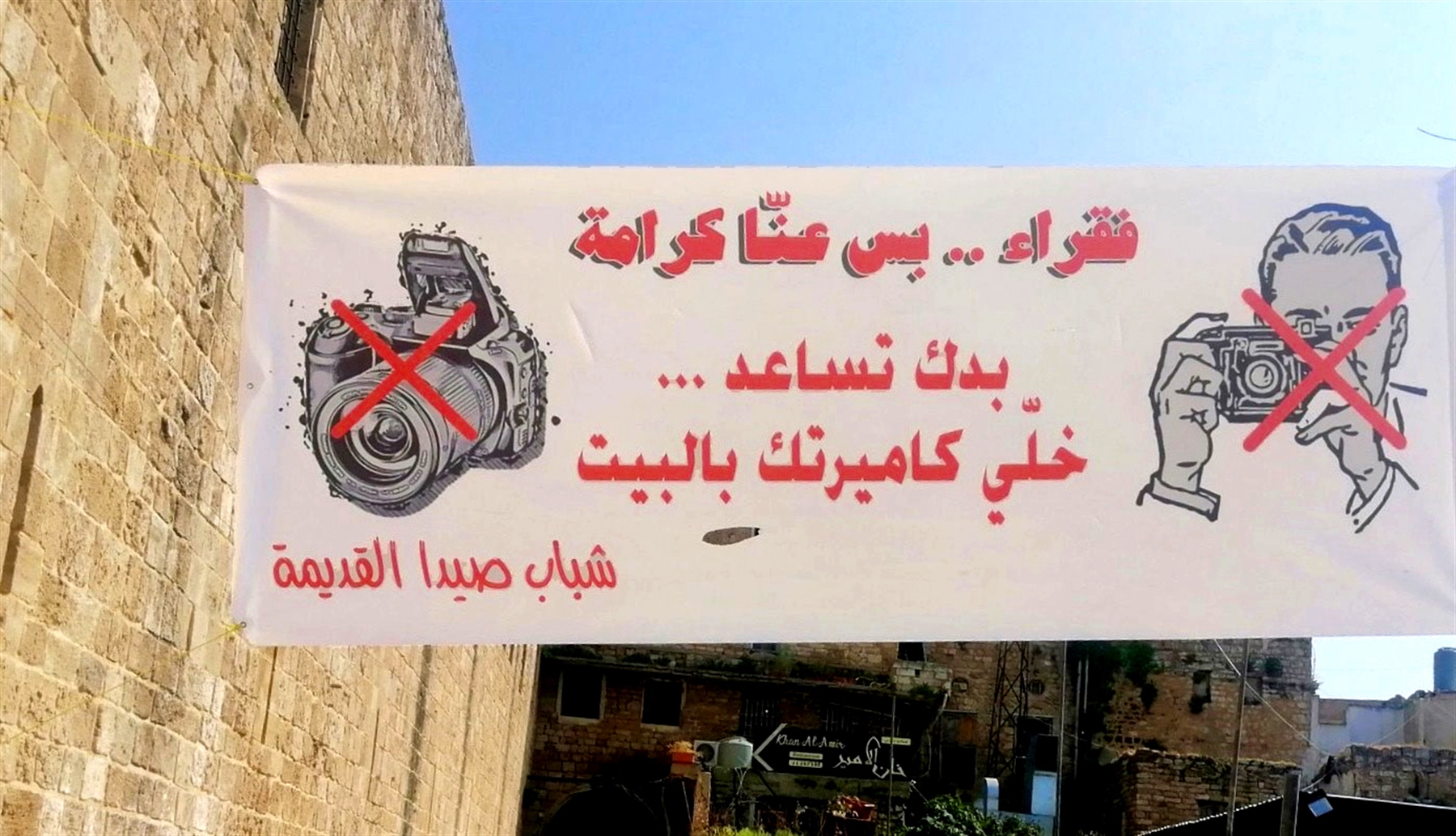 Seaside entrance to the Old City in Saida (Sidon District). The banner, placed by local citizens, targets the media and politicians emphasizing that no photos should be taken during aid distribution (Photo: Luna Dayekh, May 2020)
Share Print
This project is co-led by Mona Harb, Ahmad Gharbieh, and Mona Fawaz, with the research support of Luna Dayekh and the design support of Nour Zoghbi Fares and Ismail Hutet. To access the Covid dashboard click here, and download the data by clicking here.

Actors’ responses were categorized as follows:

To visualize actors, types of responses, and locations of actions across the Lebanese territory, we created an interactive online dashboard. This interactive tool allows the representation of data geographically across scales and provides multiple diagrammatic correlations between the indicators. The dashboard breaks down the data into three different maps, which can be navigated by jurisdiction (mohafaza, qada or locality): (i) political parties’ responses, (ii) Actors’ responses and (iii) Types of responses. We also set up a series of interactive graphs to further expose the relationships that exist between the layers of data across these maps.

The dashboard’s data reveals two sets of findings that we investigate in a forthcoming research article we will be linking to when it will be published. Meanwhile, we summarize them briefly below.

On one hand, territorial sectarian politics are amplified: most of the actions documented are dominated by sectarian political parties who are providing public health services across their strongholds. Actions ranged from disinfecting streets, setting up quarantine centers, to distributing food boxes branded with their logos and signs, thus reinforcing territorial and sectarian divides. There is an evident presence of all political groups, with a strong dominance to Hezbollah, and a quasi-absence of the Future Movement. Some religious actors have been identified, namely Sunni Islamic organizations in Beirut and Saida. It is also worth noting that several municipalities have allied with political parties to implement curfews and lockdowns. We also document incidents against Syrian refugees and migrants in which entire buildings were forced into quarantine in the presence of security forces1, while eviction cases were reported elsewhere.2

On the other hand, a longing for a collective and for a “public” is apparent in the many civic-based solidarity initiatives as well as in the widespread support for the public hospital and its workers. These initiatives mark a sharp contrast to the sectarian responses mentioned above and a reminiscent of the sense of collective and the reclaiming of the public that people experienced during the October 2019 uprisings. Civic-based initiatives are numerous and target vulnerable groups (e.g. migrant domestic workers with Egna Legna, refugees with CRSP and Bread and Salt, elderly with Lifeline and Beit al-Baraka, etc.), impoverished localities (e.g. Nusaned in Akkar), and various sectors (e.g. Busline Heroes’ initiative for bus drivers and Baytna Baytak for health workers).

Our work thus emphasizes how the governance of the pandemic in Lebanon is helping to fortify sectarian geographies, even as the vaccination phase is beginning to unfold. Indeed, several political groups are racing to secure vaccines for their constituents in their strongholds3, eyeing the forthcoming elections. Yet, the project also underscores the important presence of multiple acts of solidarities and mutual aid initiatives that challenge the dominant political and moral order.

1 Chantal Lakis, "Locked Up: The Struggle Faced by Migrant Workers with Coronavirus in Lebanon", July 4, 2020, https://english.alarabiya.net/en/views/news/middle-east/2020/07/04/Locked-up-The-struggle-faced-by-migrant-workers-with-coronavirus-in-Lebanon

These layers are made available under the Open Database License (ODbL). Please attribute your use of these layers by citing the data as such: "The Territories of the Covid-19 Response in Lebanon” by the Beirut Urban Lab (American University of Beirut).