The Beirut Blast: A Week On

Migrant workers look on the destruction of the port from the highway overlooking it (Photo: Mona Harb)
Share Print

As we write this short reflection, the Beirut Port’s August 4, 2020 explosion still runs deep shockwaves through every one of us. We are just beginning to absorb the unmeasurable losses that have fallen on our city and its people. Some 2,700 tons of Ammonium Nitrate were callously stored in a port hangar, in close vicinities of residential neighborhoods, for six years. It happened with the full knowledge of successive port authorities, customs’ officials, and many other public officials (and unofficials). They detonated as if to announce the resounding end of an era: Lebanon’s post-civil war corrupt order could not have gone down peacefully. Almost a week later, the city is mourning its dead, young and old, while most rescue teams are discontinuing their efforts to locate the remaining missing people. Bodies pile up in morgues awaiting to be identified by loved ones. Eager phones still ring to assuage the fears of friends and families, while confirming sadly the pain and losses of others. The city’s soundscapes are occupied by the screeching sounds of broken glass while trash piles up alongside debris and personal belongings. Generations of Beirutis who have gone through accumulated experiences of senseless wars desperately attempt to repress memories of earlier traumas and to convince themselves and younger ones that they are not condemned to reproduce earlier cycles of violence. The loss of life is substantial and cuts across layers of society. They include workers such as the Lebanese and migrant men who manned the city’s port at the time of the explosion and the guards who protected businesses in the vicinities. They also include wives and husbands, moms and dads, daughters and sons who were working nearby, passing by, or just sitting at home, conducting their normal lives. At least seven thousand individuals were wounded, 220 counted dead so far, 110 others still missing (Beirut City governor, Sunday, August 9, 2020). These numbers are expected to rise.

About 80,000 homes were damaged and thousands of families are left homeless. The immediately surrounding neighborhoods to the port are formed of a mosaic of urban fabrics, arrays of residential, commercial, institutional, and religious buildings, historical and new, modest and luxurious. Apartments were blast open, businesses lost—whether small grocery stores or high-end restaurants, pubs, bars, workshops, ateliers, offices, or rooms for rent. Schools, hospitals, and daycares will no longer be able to teach, heal, soothe, or care. 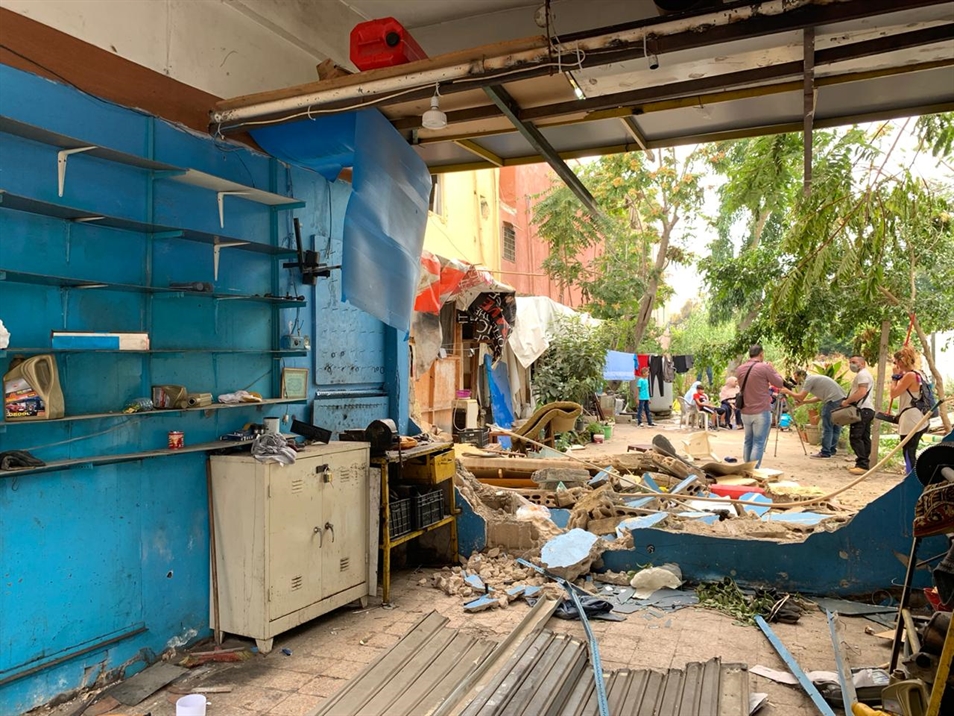 Karantina (Photo: Mona Fawaz)
If the blast effects spread to the entire city, the severe damage was primarily to the neighborhoods surrounding the port: Badawi and Qarantina are the remaining historical working-class districts of the city while nearby Gemmayzeh, Geitawi, and Mar Mikhael have been gentrifying for at least a decade. Karantina—the site of one of the first civil war massacres and the city’s historical workers’ warehouse district—experienced one more immense devastation hitting its vulnerable populations and fragile homes, some of which having crumbled. Immediately east of the port, Mar Mikhael and Gemmayzeh, where some of the only remaining clusters of Ottoman and French Mandate heritage buildings still stand, numerous structures display structural cracks, broken balconies, fallen façades, and more. Every building here and around has lost windows, doors, and often more. In Beirut’s historic core turned into a high-end downtown, building façades and large-scale glass panes and window frames have blown to pieces, eviscerating millions of public and private US dollars. The port, Beirut’s main lifeline where about 80% of direly needed food imports flow, is severely scathed and its full repair expected to drag over years. Beyond those vicinities, the impacts of the explosion expanded to all of Beirut’s districts, well beyond the limits of municipal Beirut, affecting homes, offices and shops in districts such as Badaro, Jnah, Ghobeiri, Furn el-Chebbak, Dora, Bourj Hammoud, and Sin el-Fil where glass panes were shattered, aluminum and wood doors and windows blown up. 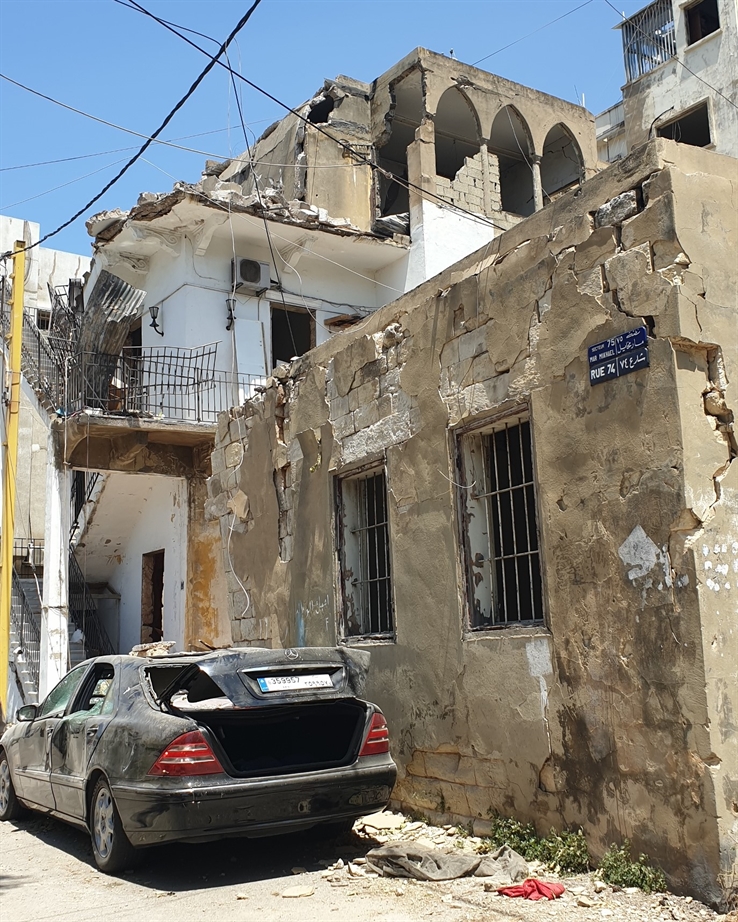 In Karantina, an old building shows a structural break in its wall (Photo: Soha Mneimneh) 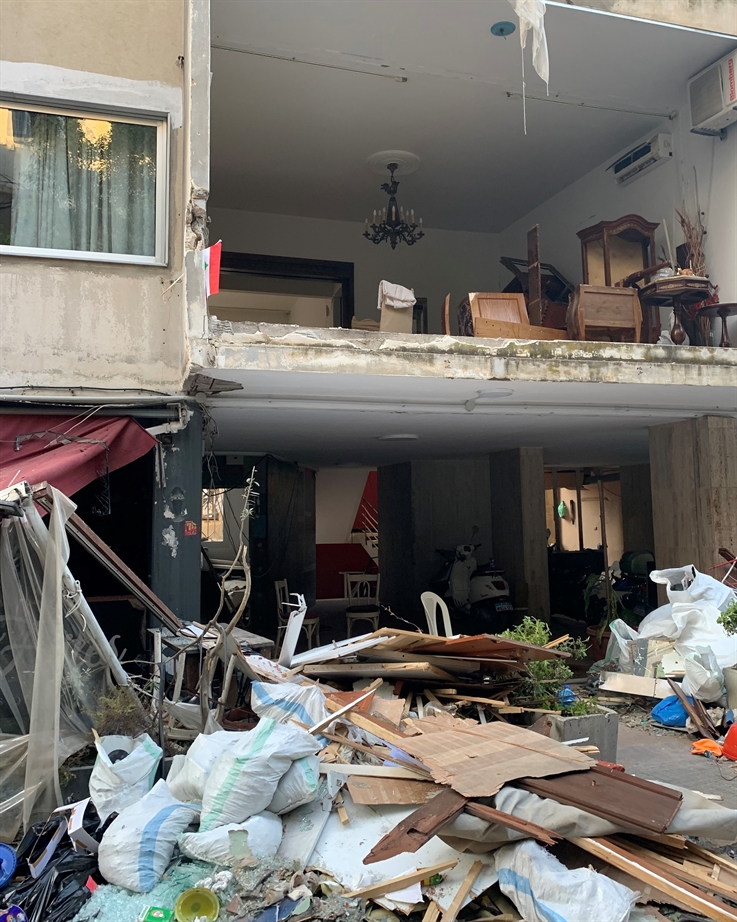 In Geitawi, homes are exposed after the building facade crumbled (Photo: Mona Fawaz) 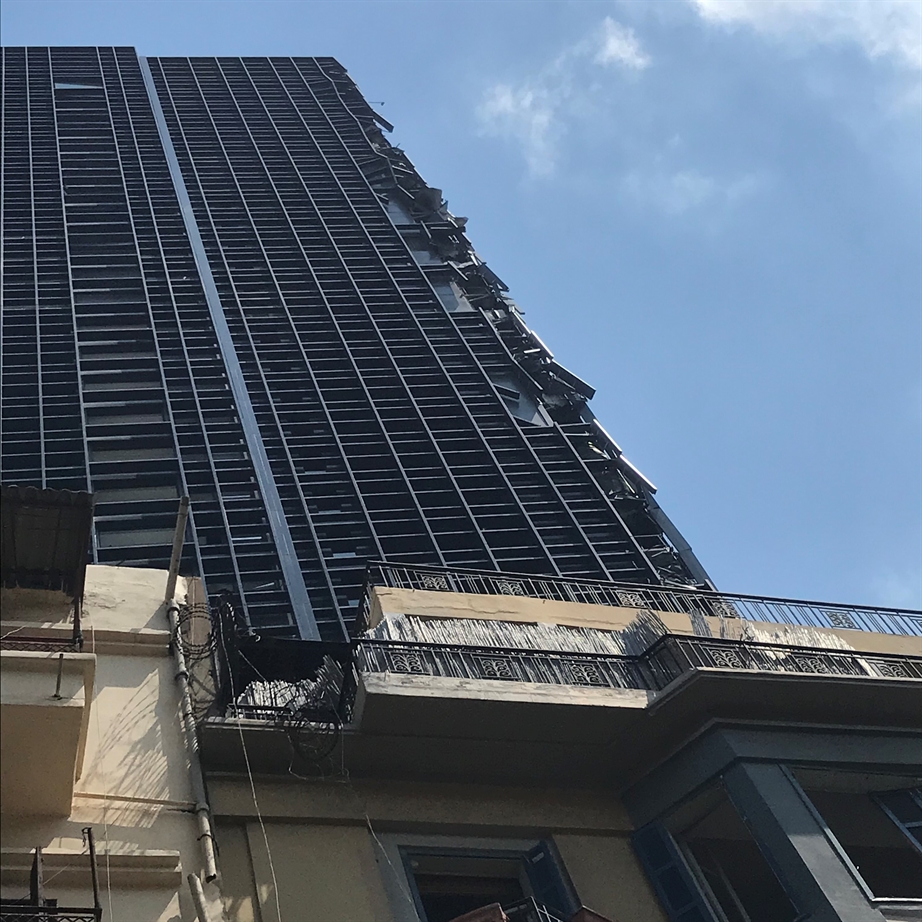 It is poignantly flagrant that, yet again, it is city dwellers who are securing the first responses. Streets are filled with volunteers armed with brooms and shovels, helping clear up the rubble and wreckage, distributing water and food. Some are assisting friends; others are here to express solidarity by offering a helping hand or provide aid. In contrast to this vibrant mobilization, central and local government responses are slow, failing to put forward an immediate emergency plan or to organize an effective relief strategy. Rather than coordinators, state agents blend in the crowd of actors on the ground: Thus, agents of the police forces and the civil defense work side by side with members of political parties, non-profit organizations, religious and humanitarian groups, scouts, students, university volunteers, and many others. 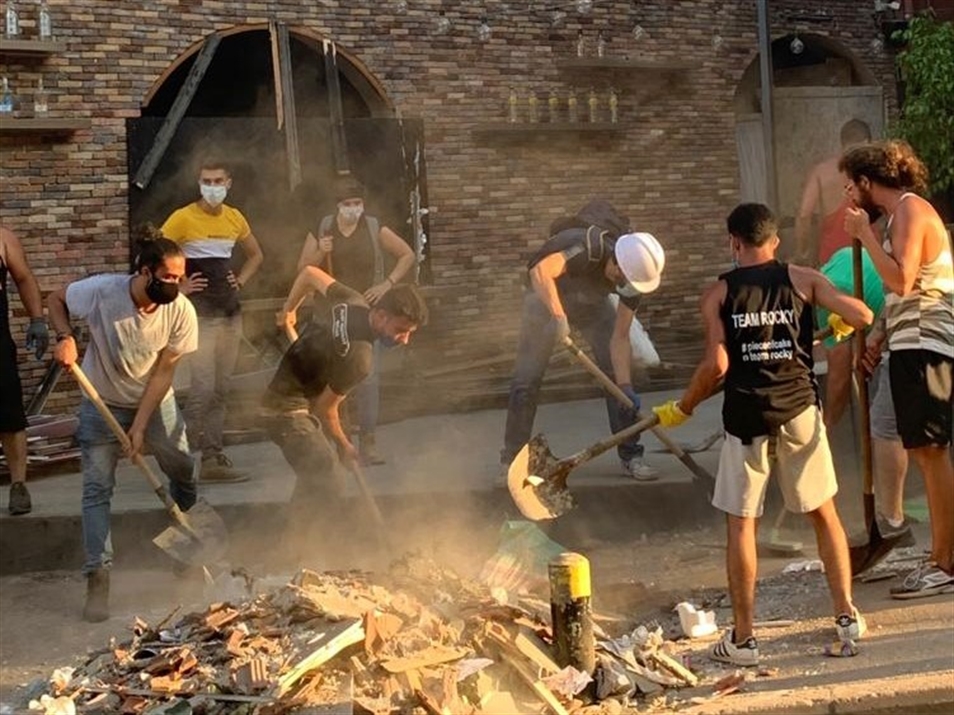 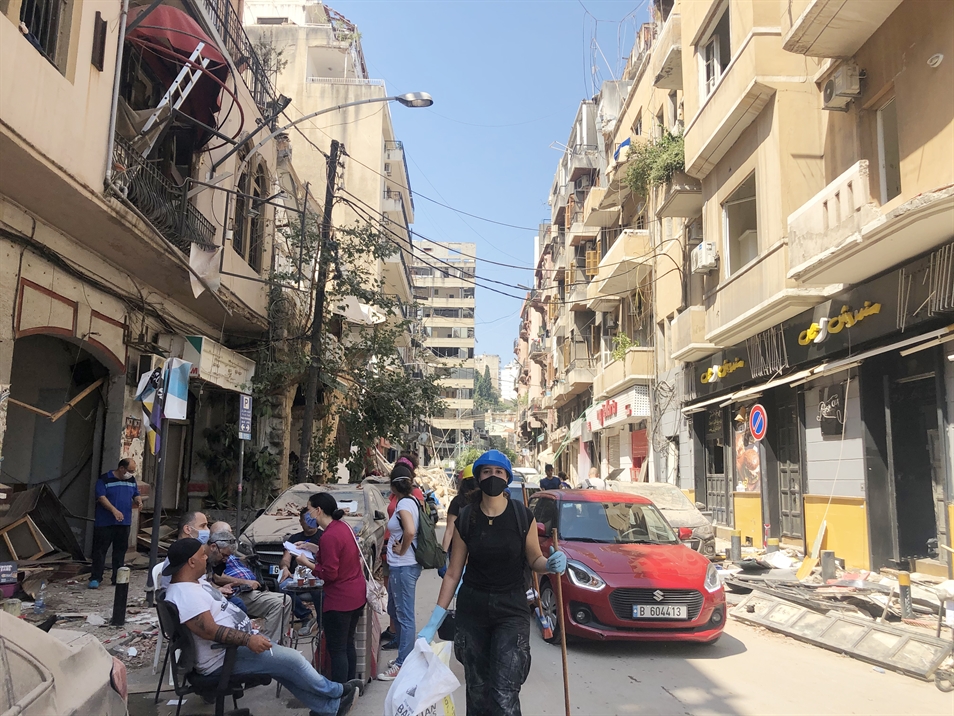 Volunteers in Gemmayzeh (Photo: Mona Harb)
In parallel, anger is mounting as people reckon with the devastating failure of the Lebanese political system to protect their livelihoods. Everywhere, conversations reflect distrust towards public representatives. When they ventured inside neighborhoods, the latter were received with verbal and physical insults. People are juggling multiple crises: they are exhausted by months of lock-down imposed by the Covid-19 response, weakened by the financial meltdown that has wiped out life savings and reduced the purchasing power of most segments of society to mere survival, threatened by the scarcity of food items, and frightened by rising levels of poverty now estimated at 50% by the World Bank. While they may disagree on the triggers behind this criminal act, most people are voicing outrage about the callousness of successive representatives and decades of unaccountable governance. The explosion is indeed experienced by many as a war on people, and the city boils with calls for protests in line with those we witnessed over the weekend. 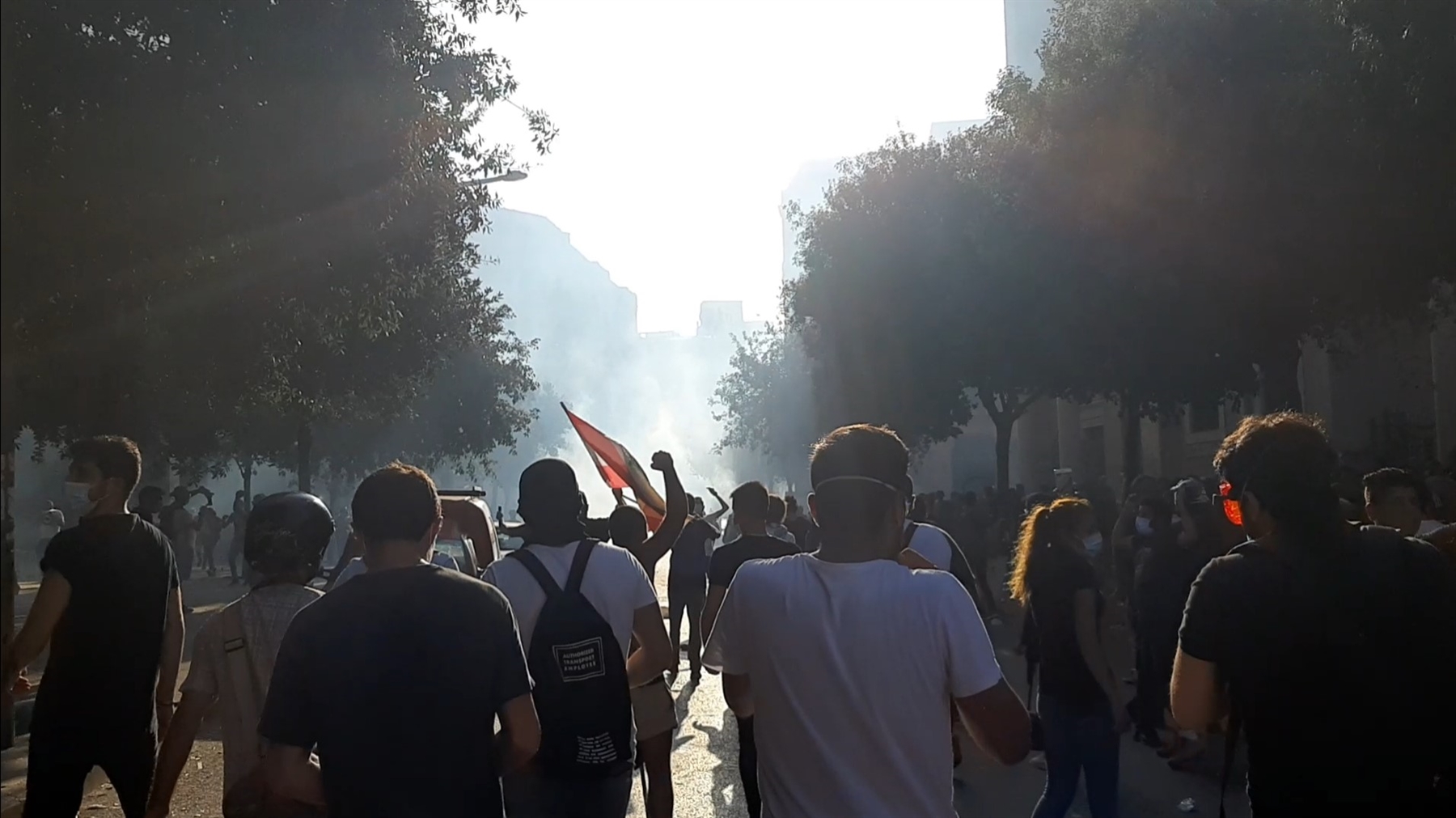 Protest on Saturday, August 8, when tear gas and live ammunition were fired at protesters, and more than 700 were injured (Photo: Dounia Salamé)

Looking forward, it has become evident that recovery will be a tedious path. The fear is that the post-blast reconstruction will come to consolidate the very forces that led to the demolition of Beirut’s neighborhoods. We are reminded of the ways in which the post-civil war process of Beirut’s historic core in the early 1990s consolidated the divisions generated by the civil war on the city: how it severed the historical core from its connections to other urban districts through a network of highways, ripped the multitude of small scale claimants from their property rights, wiped out heritage buildings or voided them from their social and communal meanings, and handed over the management of recovery to a private real-estate company—Solidere, whose main goal has been to maximize speculative property investments for its shareholders. The outcome, visible to date, is a nameless “downtown” bereft of life, claimed mostly by banks and speculative investors, and unable to contribute to the life of the country beyond acting as the site of angry protests. 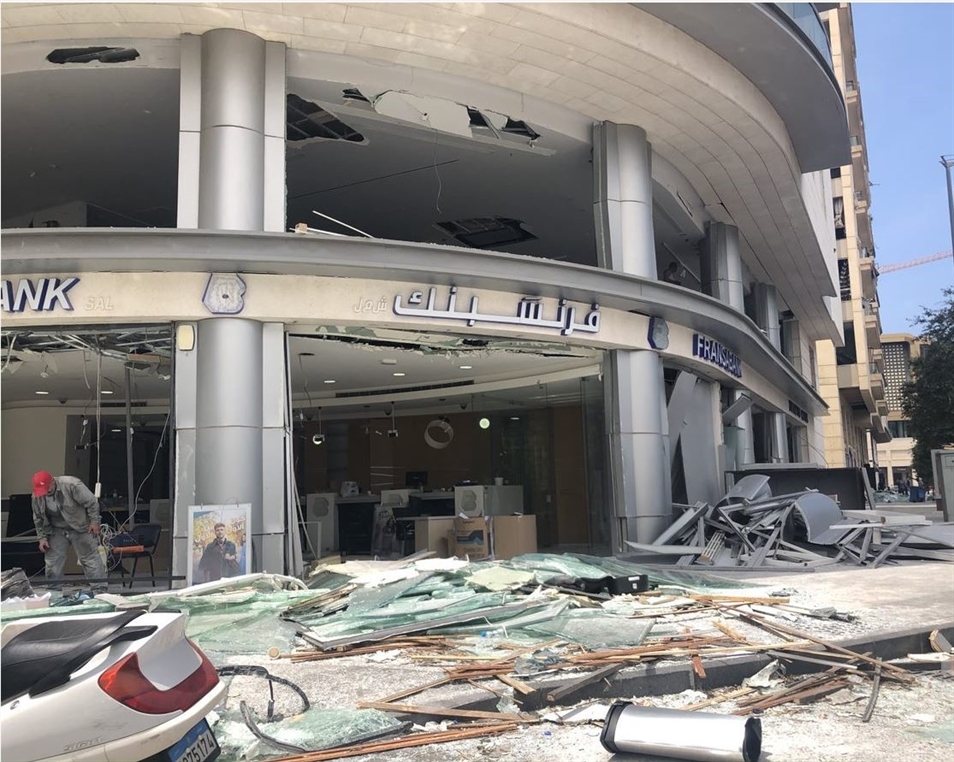 One of many banks in Beirut's historic core, devastated large-glass facades is a typical sight in the area (Photo: Mona Harb) 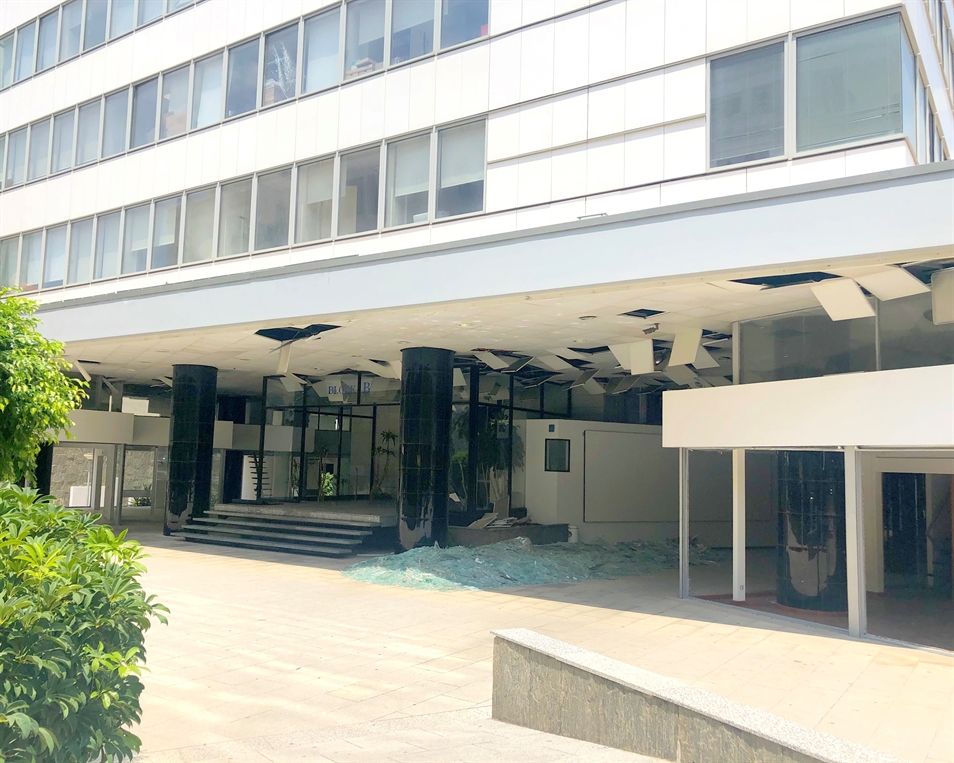 Similarly, the post-war reconstruction of the 2006 Israel War on Lebanon consolidated districts of Beirut’s suburbs and South Lebanon as political territory, placing the entire task of the post-war project in the hands of Hezbollah and foreclosing any discussion about the relation of neighborhoods such as Haret Hreik to other districts of the city, preventing a communal discussion of urban livability, blocking the possibility of imagining an urban recovery where everyday practices are prioritized over capital interests or security concerns. A looming nightmare scenario would make of the post-blast reconstruction an occasion to consolidate the devastation brought about by the explosion. It could leave the districts severely hit by the blast to deteriorate slowly until the next economic cycle continues the gentrification process that has been wiping out the impoverished elderly population, the vibrant energy of struggling youth, and small industries. If aid and capital were to flow without consideration for people, it could also speed up gentrification, destroying another important pillar of Beirut’s history.

In a city abandoned by public institutions for decades, in a country stricken by bankruptcy and dominated by sectarian politics, many people struggle to organize their lives through non-partisan social and spatial infrastructures of mutual support and exchange. Any recovery process should start from there. Social and economic networks, both formal and informal, both tangible and intangible, need to be restored and empowered, including sites of shared memories and social significance. Beyond humanitarian aid and relief, a community-based recovery that is inclusive, participatory and environmentally-conscious needs to be envisioned and put on track; one that does not only reconstructs physical structures but also addresses the injustices and vulnerabilities that existed before the blast in order to build a stronger community, brought together by multiple social ties, local economic activities, and rich cultural heritage.