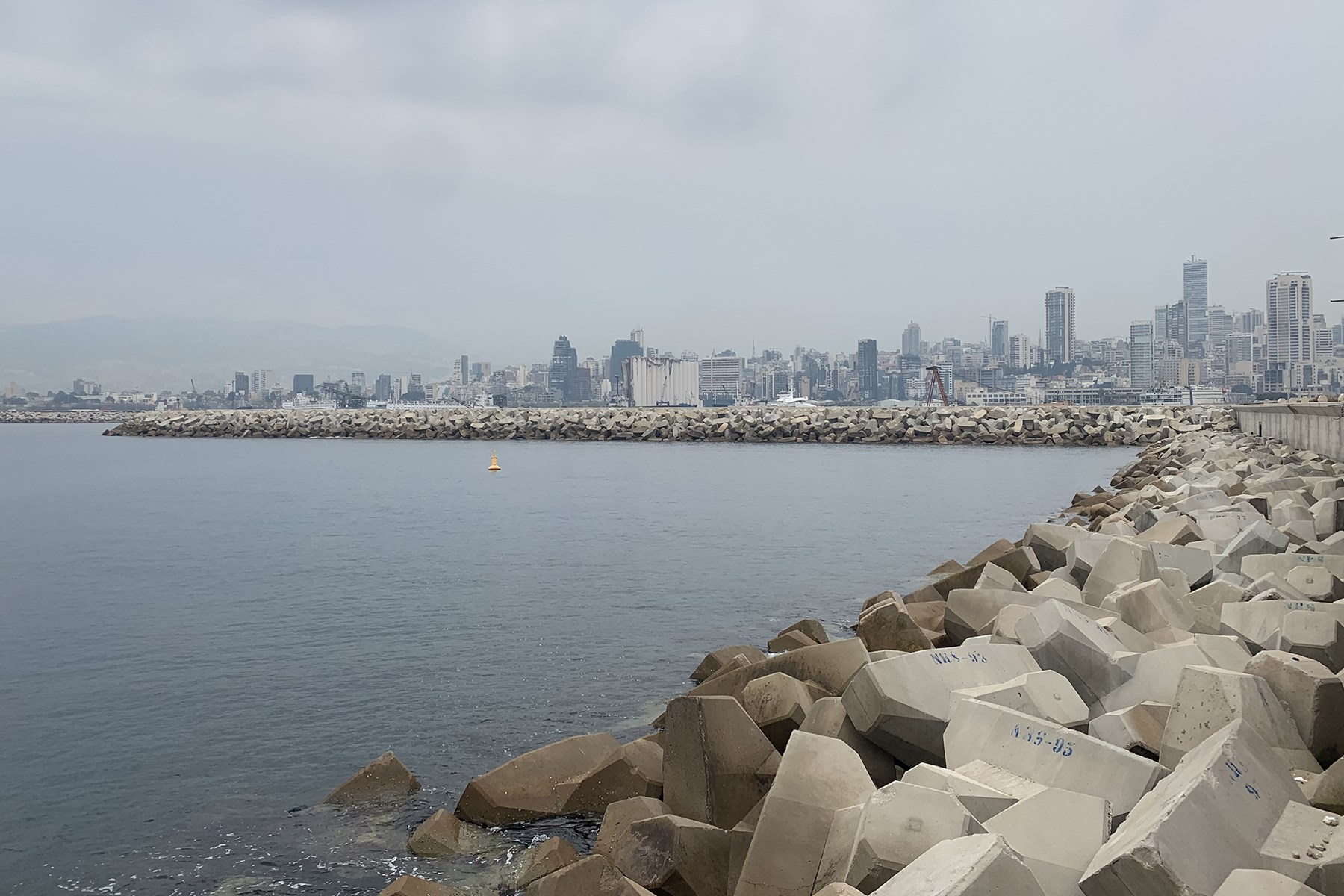 Photo: Mona Fawaz, August 2020
Historic preservation is not a technical choice, but a profoundly political one. What a society chooses to commemorate—or to erase—has great consequences on its collective identity.
Lebanon's political class is determined to erase yet another one of its crime scenes: the site of the 2020 Beirut port explosion that rocked the city and damaged at least a third of its buildings, killing hundreds of people and wounding thousands more. The Lebanese government is planning to demolish the port's gutted grain silos, the only structure left standing near the epicenter of the blast, claiming they are at risk of collapse.
Share Print
This article was first published in Democracy in Exile, the journal of DAWN (Democracy for the Arab World Now) on May 6, 2022.

Demolishing the silos will put a nail in the coffin of a stalled investigation into the blast that this group of warlords-turned-statesmen are determined to shut down. It almost amounts to a national tradition in Lebanon. Since the end of the Lebanese civil war, it has become standard practice to disfigure and erase the marks of crimes committed against the country's civilian populations. The decision of whether or not to demolish the silos is unequivocally a political act, rather than a technical one. Like other Lebanese citizens committed to the cause of accountability, we advocate for preserving the remaining silos as a memorial that would embody the collective aspiration of a just and viable future for Lebanon.

Since their construction in 1970, the silos have been a familiar part of Beirut's skyline—a modern architectural layer integral to the city's built heritage, and an emblem of the era of state-building in Lebanon. At the time of the explosion, according to the Ministry of Information, the silos held 85 percent of the country's grain supplies. Following the blast, the site has acquired additional heritage value as a stark symbol of survival, commemorating a city and its people. Located only 85 meters from the blast's epicenter, 14 of the 48 silos still stand today. Although the structure has lost its function as a grain silo, its visible scars embody the public's outcry for justice and accountability. Combined with the nearby 43-meter-deep crater, the silos represent both the blast itself and the protests against those responsible for it.

But today, their future hangs in the balance. A government demolition order was issued on April 14. Only one minister's signature stands in the way of their destruction. The same local and central planning agencies that failed to support the post-blast recovery and left non-governmental agencies in charge of repairing victims' homes now leverage an argument about "public safety" to justify razing the silos. Rather than prioritizing over 1,500 structurally damaged residential and commercial buildings in Beirut—most of which still need critical repairs—these officials have turned their attention to the port's silos. They commissioned a study on demolishing the silos, but when it came back ambivalent about the need to actually tear them down, only the sections that outlined the reasons for demolition were announced publicly. The entire process followed a pre-determined track toward total erasure.

Families of the victims have organized to insist on preserving the site as a physical testimony of the loss of their loved ones, but only after the investigation into the blast is complete and justice is served. Only then, they argue, can interventions be designed to turn the silos and their surroundings into a memorial. Heritage experts concur on the importance of preservation. A Beirut Urban Lab study conducted for UNESCO argued that the silos had important heritage value—a point endorsed by a group of 25 heritage preservation experts who submitted their own report to UNESCO and the Ministry of Culture, and by the Beirut Urban Declaration, an initiative by Lebanon's Order of Engineers and Architects advocating to rehabilitate heritage and reconstruct the social fabric of areas affected by the explosion. They all demanded the classification of the silos as "protected heritage." Similarly, experts from the Order of Engineers and Architects have unanimously recognized the value of the silos; the organization also provided the main group representing families, the Beirut Port Explosion Victims' Families Association, with a technical report to support the case for preservation. Despite the evidence, the minister of culture remains reluctant to classify the silos as a heritage site for protection, even though he had initially supported the classification.

What about the so-called structural question? Expert-led studies recognize the severe damage to parts of the remaining silos, without predicting a full collapse. The government's publicly commissioned report narrowly pointed to two options for demolition or consolidation, but without clearly recommending a course of action. The Order of Engineers and Architects' structural opinion indicates that given the level of documented damage to the silos, the rate at which they are tilting and their type of building material, a collapse is not likely, at least not in the short or medium term. There is expert consensus that the silos will not collapse immediately, and that a substantial section of the building—its six southernmost silos—is structurally sound. Irrespective of the structural integrity of all the remaining silos, experts also agree that the silo's site was contaminated and structurally compromised by the explosion, which means that it cannot serve as the location for future grain silos.

Nevertheless, several Lebanese officials have presented the decision to demolish the silos as merely technical, dismissing preservation claims as "romantic." Yet the Lebanese public has ample reasons to be skeptical. Many recall earlier episodes of national history, most of all after the civil war in the 1990s, when supposedly weak structural integrity was cited to justify the demolition of dozens of buildings in Beirut's historic core. It soon became clear that those claims were bogus and the motivation for demolition was private profit: clearing land for lucrative redevelopment in the name of postwar reconstruction. Perhaps most poignant was the Rivoli Cinema building on Martyr's Square, a modern architectural emblem of Beirut's 1960s, which was strapped with explosives but resisted collapsing several times before finally falling. To date, its site still stands empty in the center of Beirut, the emblem of a reconstruction that failed to protect memory and was consequently unable to fully rebuild the city or the country.

Historic preservation is not a technical choice, but a profoundly political one. What a society chooses to commemorate—or to erase—has great consequences on its collective identity. It shapes the narratives that younger generations will learn as their shared history, and the physical landscapes they will grow to identify as their own. Preservation, in other words, is essential for societies to recall a shared history and strengthen community. Preservation is also a potential strategy for social and economic development, as it tends to boost public spaces and tourism. In the context of Lebanon, where communal strife and callous governance have dominated, heritage preservation can be even more—a way to maintain, rehabilitate and develop a collective narrative that could bring together divided communities, and perhaps help build an inclusive economy. It would do so by reversing the state practice of deliberate or forced amnesia, in which history books evade any discussion of shared history for the past 150 years and national traumas, most of all the civil war, are not memorialized in any way.

To many activists and heritage specialists in Beirut, it is no coincidence that successive Lebanese governments composed of or allied to individuals directly blamed for specific crimes—from all the horrors of the civil war to the port explosion in 2020—would look to prevent the memorialization of their victims' history. Lebanon's venal political class doesn't want these victims coming together as a society. But that is precisely why the silos at Beirut's port must be preserved.