Beirut: A City for Sale?

This study provides a holistic overview of the transformations in the production and exchange of Beirut’s housing stock in the Lebanese post-civil war period.
Research began with a comprehensive survey of all buildings developed in Beirut during the 1996-2019 period on the basis of a database of the filed construction permits during this period. All 2,357 sites were mapped and additional information was gathered for the 1,634 residential developments identified on-site. Data collected includes social, physical, and environmental attributes that helped us articulate a comprehensive understanding of the trends shaping the evolution of Beirut’s built environment in the studied period. Building trends were charted in relation to larger transformations in the Lebanese political-economy, regional and global events influencing practices and flows of capital into the building industry. They enabled researchers to derive important findings about the housing sector and its organization. In theorizing ongoing trends in the housing development sector, the research takes actors involved in building development as its main entry point, unraveling the dynamics that organize the production and exchange of housing.  We point out three characteristics of Beirut’s residential built-environment in this introduction, while more findings can be found on the Beirut Built Environment Database where viewers can browse some of the dataset’s layers directly.
Share Print
Lead: Mona Fawaz  Fieldwork coordination, data management, quantitative data analysis: Michelle Moawad GIS database guardian: Shareef Tarhini Maps and data visualization: Nour Zoghby Fares and Ismael Hutet. Neighborhood case studies: Abir Zaatari (Aicha Bakkar) and Soha Mneimneh (Tareeq el Jdideh). Desk research on developers: Yara Nahle Graduate students on the project: Hayfa Abou Ibrahim and Isabela Serhan The whole team at the Beirut Urban Lab would like to thank the field researchers who scouted Beirut's streets for four months in the fall of 2019: Abir Zaatari, Reem Salameh, Yara Nahle, Yusra Bitar, and Zeinab Chammas. Our thoughts go to Eva Khalil who would have been proud to see the fruits of her work. This study is based on data collected and published in the Beirut Built Environment Database.

Building development in Lebanon has undergone several cycles since the end of the Lebanese civil war (1990), with a sequence of booms and busts that ended with an enduring crisis that has extended for the past 6 years. Studying the correlation between on the one hand, the number of construction permits filed in Beirut, and on the other, the Lebanese regulatory framework, regional trends, and international events provides powerful insights about the forces influencing construction trends in the city. The graph shows the effects of regulatory changes in building and property regulations in encouraging construction. It further highlights the intensity of Lebanon’s Central Bank interventions as of 1997 as it seeks to incentivize banks in intervening on the real estate sector either directly or by facilitating transactions in this sector, ultimately playing a critical role in channeling the flow of domestic and external capital to the building industry. Flows of capital are nonetheless heavily affected by US Treasury policies that restrict capital inflow to the country particularly after 2015, policies restricting travel and investments from citizens of the Arab Gulf in the country as of 2012, as well as the impacts of local and regional wars (e.g., the Israel war on Lebanon in 2006, the war in Syria as of 2011) on this sector. All in all, these trends demonstrate the heavy handed influence of Lebanese public policy on the housing sector, as well as the severe vulnerability to regional trend. The strong influence of financial flows of capital on the sector’s development further point to the shift in the sector towards assigning a higher value for property as investment over the social value of land as shelter.

Vacancy rates are extremely high across the city, particularly among higher end apartments, where rates reach above 50%, but well across the remaining urban districts. By vacancy, we refer to apartments that were found at the time of the survey to be unoccupied and unfurnished. These apartments include apartments still held by developers who await a market recovery before they sell them. They also include apartments purchased as long-term investments, mostly by expatriates but potentially also by rich Lebanese individuals.

Vacancy can primarily be explained by the valuation of land as a reliable investment for the rich local and expatriate elites. The trend is common in countries such as Lebanon where currency devaluation is an endemic risk. This valuation is amplified by a dominant discourse promoted by the powerful real-estate lobby that has institutionalized its influence over the past decade through the establishment of public agencies such as IDAL as well as lobby groups. With strong connections to the political and bankers’ classes, themselves hardly distinguishable from each other, the role of the real-estate lobby has been heavily publicized in the local press through advertisements, conferences, events, and other occasions where a perception of reliability and success is promoted for the sector.

Vacancy is facilitated by the tax structure which exempts empty apartments from municipal and property taxes. Conversely, conceptualizing land as an asset comes at a hefty price for the vast majority of Lebanese households who suffer from the heavy burden of shelter costs on their general expenditure. It is indeed ironic that while thousands of Lebanese households struggle with long daily commutes and many young couples choose to emigrate and/or delay life plans because of the unaffordable housing prices, one in four apartments is vacant in the city.

To understand how the territorial organization of space is produced, one needs to account for the deep embeddedness of development practices within the socio-political organization of society and its multiple levels of governance. The study points to the role of families, political parties, and religious institutions in channeling economic transactions and formal permitting processes. It reflects the importance of social and symbolic capital for specific actors to impose themselves as long-term developers, capital cultivated and accumulated among a relatively restricted number of actors who can be considered successful established developers. In addition, building activities are spatially organized through the logics of class and sectarian segregation that dominate everyday interaction in Lebanon. Religious/Sectarian enclaving continues to dominate the urban geography, where a developer’s sectarian affiliation is highly correlated with the distribution of his activities. Thus one clearly reads the marks of the civil war territorial divisions but also the subsequent political/sectarian tensions through the distribution of building activities. On the other side, a financial elite composed of development agencies affiliated directly or indirectly to banks, investment companies, and well-off investors operates within a territory defined along class lines and controls primarily the sea-view and some of the elegant districts of Achrafieh. 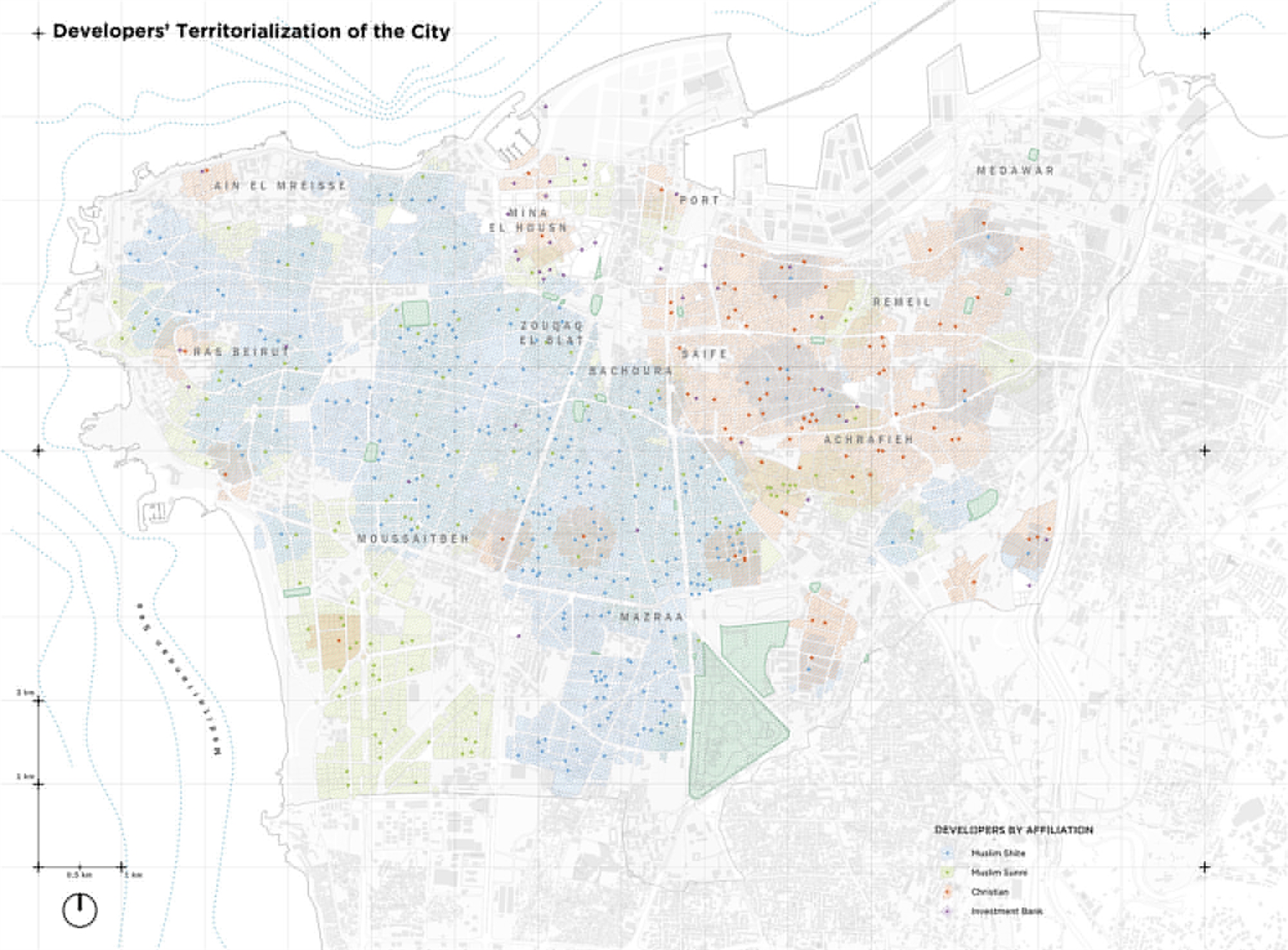