Mapping Security in Beirut: A Decade of Research 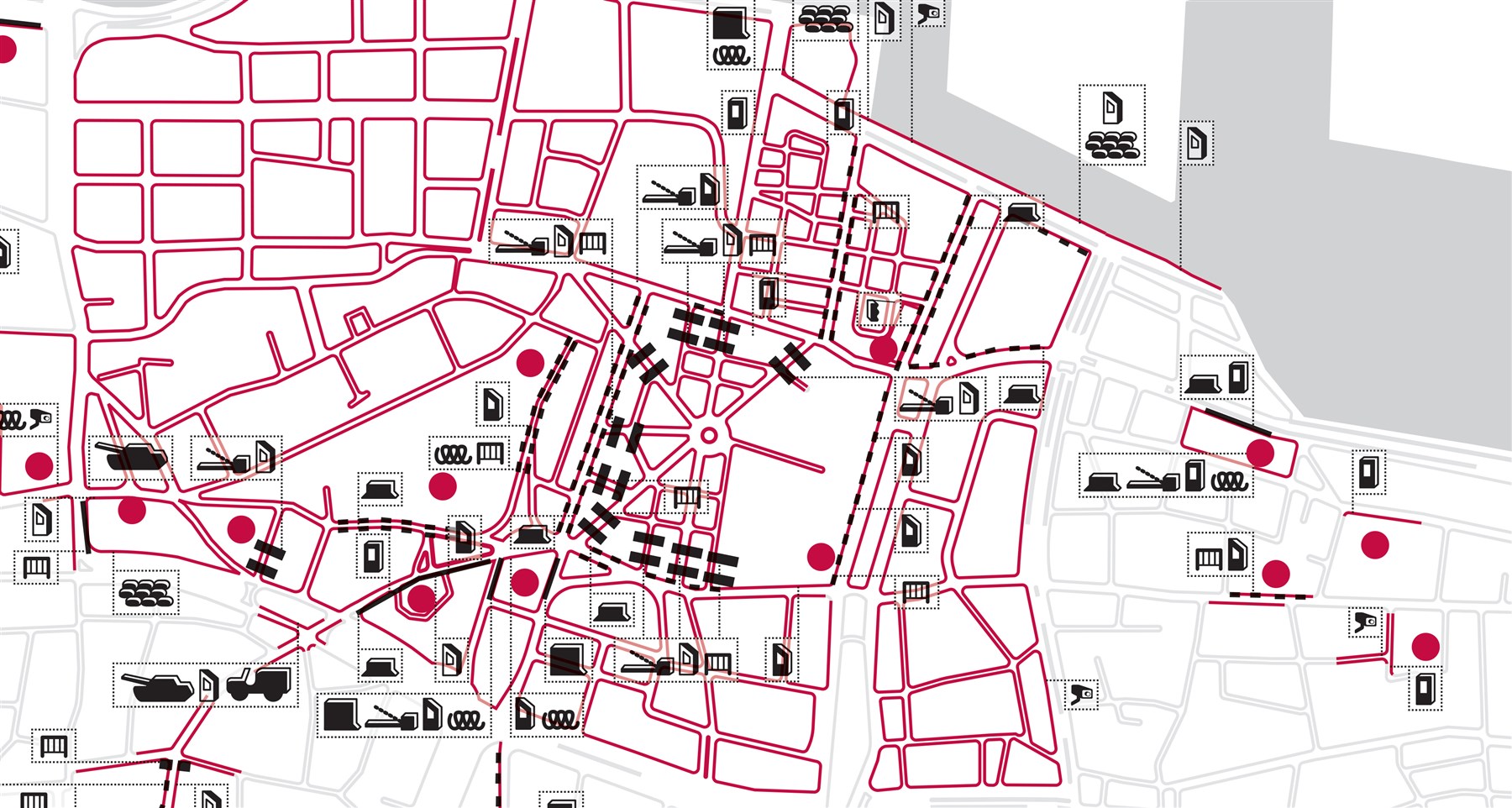 Militarized security is perhaps one of the most defining aspects of Beirut’s public and shared spaces. Not only does it substantially influence everyday life, but it also reorganizes the city’s multiple publics, enforcing numerous forms of restrictions on some of the city’s users, while facilitating the fluid circulation of others. A closer look at Beirut’s militarized security reveals that what reads as a homogenous layer is in reality composed of heavily fragmented units that are managed by overlapping and decentralized systems that often blur the boundaries between public and private realms. Through the years, we have conducted several projects exploring the deployment of security, its effects on the reorganization of the urban geography of the city, and its repercussions on the daily practices of various groups of city users.

Checkpoints, “no parking” signs, security cameras, speed bumps, sand bags, tanks, metal barriers, barbed wire, and other physical elements of the security deployment apparatus have become familiar elements of the cityscape, which almost every dweller in today’s Beirut has to navigate daily. They translate into blocked streets, deviated passages, no parking zones, no photography areas, or securitized special entry areas and mark the everyday lives of the city with experiences of harassment, longer commutes, and constrained accesses. Often described as “temporary”, the security mechanisms that started gradually reinvading Beirut’s streets in the mid 2000s have consolidated into an anxious cityscape and affected deeply the way the city is practiced and lived. 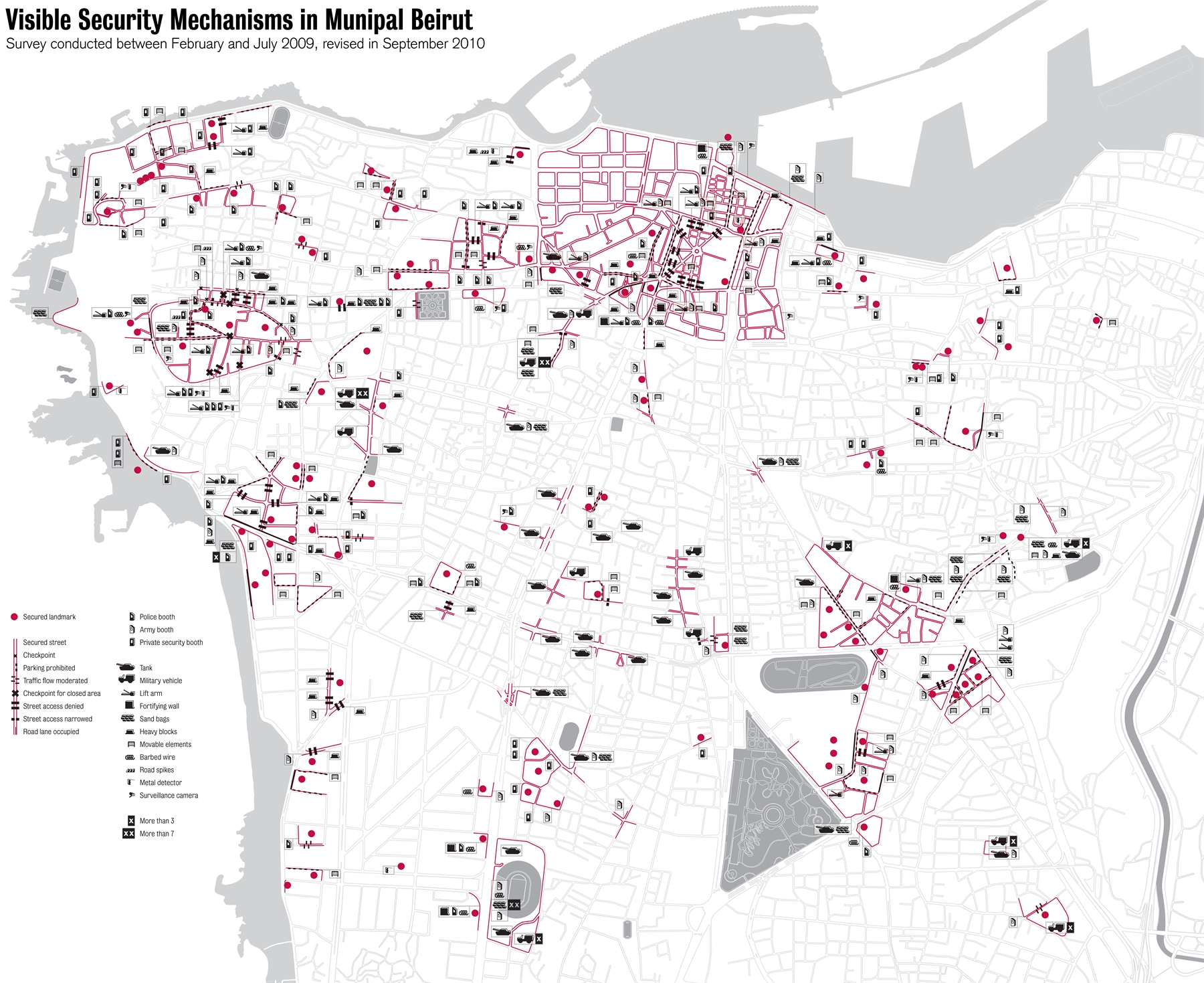 Map showing the visible security mechanisms in Municipal Beirut, published several times between 2010 and 2015.
By mapping the ubiquity of security elements in the city, this research project led by Mona Fawaz, Ahmad Gharbieh, Mona Harb and Nadine Bekdache sought to raise challenging questions about the reorganization of the city’s public spaces through the normalization of militarized security. Far from a simple protection, security, we argued, amounts to a reorganization of the public itself, reflecting the existence of multiple public(s) with differing rights often recomposed along the social hierarchies of class, gender, sect, national belonging, and sexual orientation. By decoding the elements of the security deployment, we further showed that the protected public is often hijacked by the personalities of a handful of political figures who qualify as a “threatened publics” to be protected while urban majorities are reconstructed as the threat. The research further documented the shifting lines of what is acceptable and what is not in balancing between infringement on individual civil liberties, on the one hand, and acceptable levels of threat, on the other. It showed the blurring boundaries between what counts as private or public. The research finally showed that the implications of this security deployment vary considerably across users, depending on one’s position in the social, gender, moral, national, and class hierarchies. It highlighted ways in which city users negotiate these social hierarchies by developing a competence in reading security deployment or by activating forms of capital that can facilitate their circumvention. This project was published, with others, in a publication titled "Beirut: Mapping Security," available for download in Arabic. An earlier version is available for download in English. 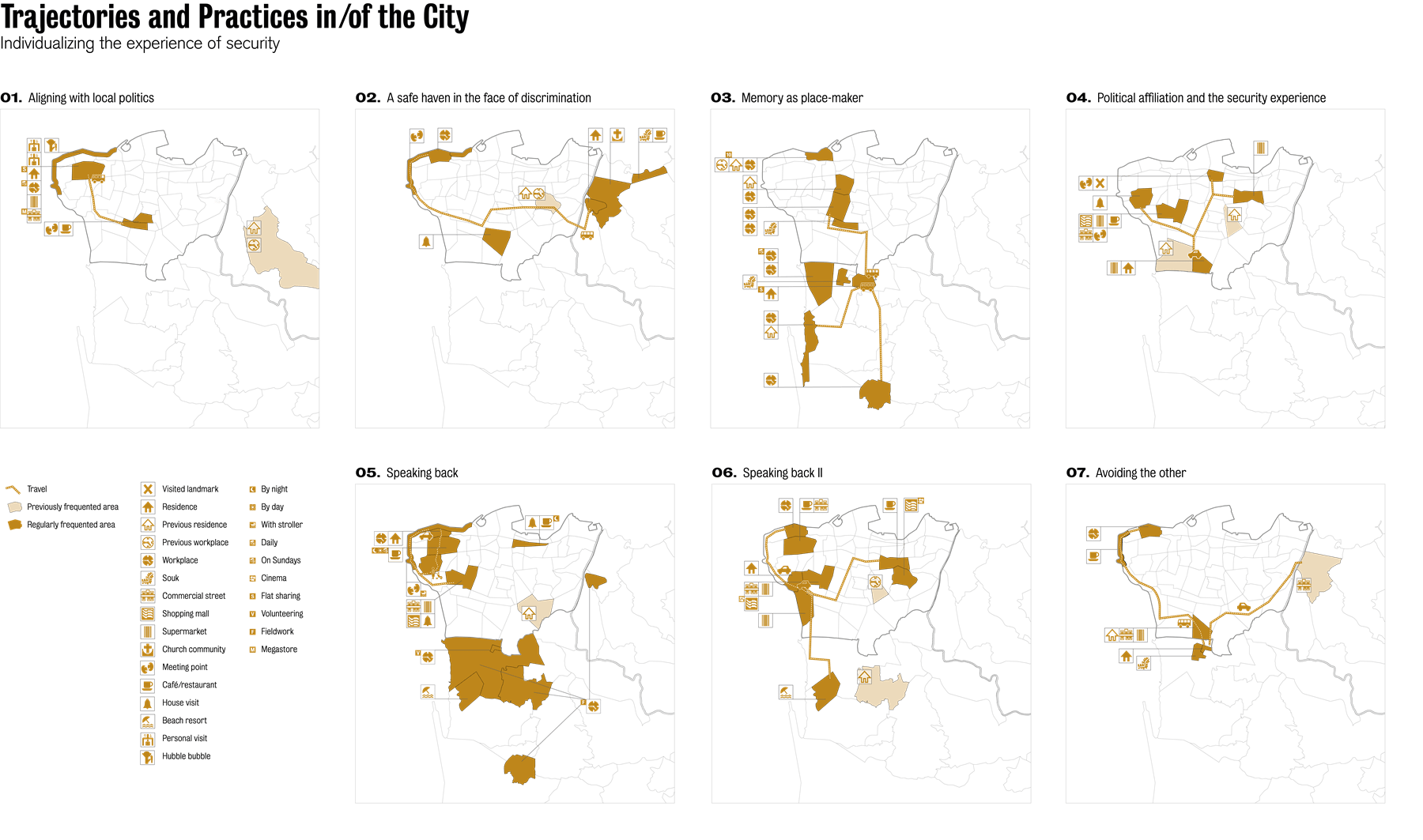 These maps show the trajectories of several individuals in Beirut. The stories of three domestic workers (one from Bangladesh, the second from Nigeria, and the third a Palestinian refugee), one Syrian worker, and four middle class Lebanese citizen show how class, sect, and nationality, intersect with experiences of the city and its security.

2018: Refugees as navigators of the militarized security of Beirut

In investigating the role of refugees as city-makers, militarized security emerged as a central concern of everyday practices particularly in influencing urban mobility and the visibility it entails. Indeed, an integral element of the refugees’ rising competence in navigating the city rests in learning how to read and circumvent harassment deployed either by the police force or by local strongmen who seek to impose their authority through specific territories. This was imperative as Lebanon’s regulatory framework effectively criminalized the presence and labor of refugees, consequently enhancing their vulnerability to the security apparels. Through the mapping of young Syrian men working as delivery drivers, opening businesses, or rebuilding a sense of home in Beirut, we learned that militarized security was an essential determinant of the choices of everyday mobility and residency. Security determined trajectories. Security also framed “hot spots”, zones completely outside one’s practice, and defined “scheduled access” for areas where deployment intensified at night. Practicing security was also a competence one acquired. Thus, interviewed delivery drivers spoke of “evading” harassment as part of the skill set one learns in their occupation, a knowledge at least as important to navigate the city as the city’s roads and pathways. It involves checkpoint prediction and avoidance, maneuvers to avoid tickets, and modes of circumventing any hurdle that can be bypassed. Aside from competence building, the task requires an infrastructure of information sharing which delivery drivers have secured through social media platform and cellular communication platforms on which they regularly share information about new and/or temporary hurdles –particularly checkpoints. Ultimately, one can speak of a networks of information sharing that connects refugees working as delivery drivers with other refugees in the business, but also, more generally, with trusted groups of motorcycle drivers, irrespective of national or religious belonging, who mutually support each other by warning against checkpoints or other street dangers.

In the summer of 2019, we sought to revisit our 2009 survey of security mechanisms in downtown Beirut. At the time, the 2015 protests against the mismanagement of solid waste had seen the authorities add additional concrete blocks, walls, and restrictions in access of downtown. These mechanisms initially deployed in response to protests remained permanent long after they ended. Our survey, conducted and mapped by Tom Abi Samra, showed that private and public security mechanisms were interlinked in downtown Beirut, protecting both luxurious private property (shops or apartments), as well as governmental institutions.