Initiatives in Response to the Beirut Blast

How to ensure a people-centered holistic recovery process, in ways that are inclusive, gender-sensitive, and environmentally sustainable, in order to redress deep-rooted socio-spatial inequalities and reclaim the public domain?

On the 4th of August 2020, the huge explosion that detonated in the Port of Beirut killed more than 200 people and wounded 6,000, and left dozens missing. Surveys show that 300,000 homes and livelihoods have been affected in several neighborhoods adjacent to the Port. The Beirut Urban Lab mobilized in response to the blast to support efforts on the ground and to initiate its own work upon site visits and early assessment of the situation.

Share Print
Lead: Howayda Al-Harithy, Mona Fawaz, Ahmad Gharbieh, Mona Harb.Collaborators: Serge Yazigi and Habib Debs.Neighborhood Coordinators: Dana Mazraani and Luna Dayekh (Mar Mikhael and Gemmayzeh), Dounia Salamé (Jeitaoui), Batoul Yassine (Karantina).GIS database guardian: Shareef Tarhini. Maps and data visualization: Nour Zoghbi Fares, Ismail Hutet, and Isabela Serhan.
One month after the blast, we can already identify some of the typical patterns associated with earlier post-disaster responses. In a context where state institutions play at best a subdued role and are failing to position themselves as the custodians of a common good, the challenge of coordinating a people-centered recovery is massive. Many actors operate in absence of coordination and shared vision or framework. The de-facto reconstruction approach set in place through the involvement of most stakeholders is generally based on quantitative and physical assessment of damages, in which buildings are the focus. While the approach is important to introduce the necessary physical repairs, it falls short from understanding urban recovery as a holistic and multilayered process, one that goes beyond the physical and the humanitarian to include an actual reconciliation of people with place. It further fails to locate the blast within historical urban processes that have shaped the production of the severely affected neighborhoods, addressing it, instead, as a momentary rupture. However, unlike previous patterns, and given the political landscape in Lebanon before and after the actual moment of the blast, the army emerges in this case as the lead in coordinating efforts on the ground. This unprecedented model has many uncertainties and creates a new top-heavy direction to this work. Building on its experiences in urban policy advocacy, mapping, and post-war reconstruction studies, the Beirut Urban Lab initiated multiple interventions that challenge the dominant framework of post-blast reconstruction and redefine it along the lines of a holistic and inclusive recovery. Within this larger objective, the Lab is leading on three projects:

The Observatory of the Reconstruction

Using the database for municipal Beirut, we are producing a platform of shared geolocalized information which helps support, coordinate and monitor damage assessments and recovery efforts within the historical development trends and the layers of information available about the neighborhoods surrounding the Beirut Port. Work is conducted with partners, including Rice University, the Lebanese Order of Engineers and Architects, UN-Habitat and Nusaned. The platform’s goals are to facilitate coordination among multiple stakeholders, as well as to produce and disseminate maps, data analysis, and findings that inform city dwellers about ongoing reconstruction processes and support setting in place a framework of urban recovery. Ultimately, this platform will become an Observatory of the Reconstruction. 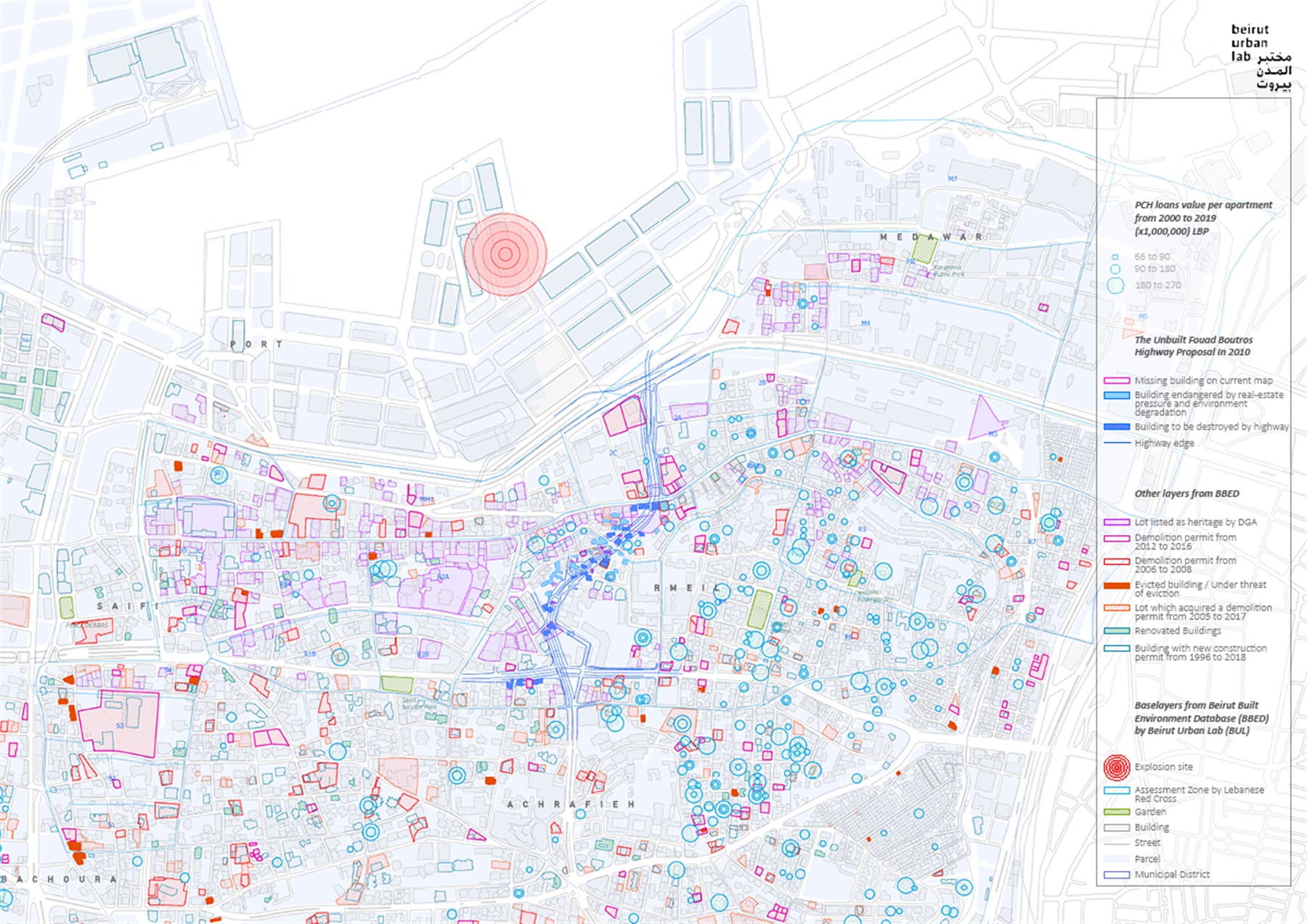 As a first step, the Lab's mapping team overlapped relevant available information about the affected neighborhood to produce a more comprehensive image of these areas

Four affected neighborhoods (Mar Mikhael, Gemmayzeh, Jeitaoui, and Karantina) are serving as case studies for the initiation of a bottom-up, inclusive and people-centered recovery processes. This work at the neighborhood level will rely on surveys aiming to highlight economic networks, tangible and intangible heritage as well as socio-spatial narratives of residents. In addition, capacity building workshops will support and facilitate for shared information, vision, and participation in co-designing each local recovery framework. Strategic interventions at the scale of the neighborhood will be elaborated, integrating low-tech innovative green and sustainable systems for the advancement of healthy urban environments and futures, with the participation of professionals and residents in community-based multidisciplinary workshops. Mapping plays a central role in these processes, as maps serve as a basis for community discussions and then as documents visualizing designs and interventions. 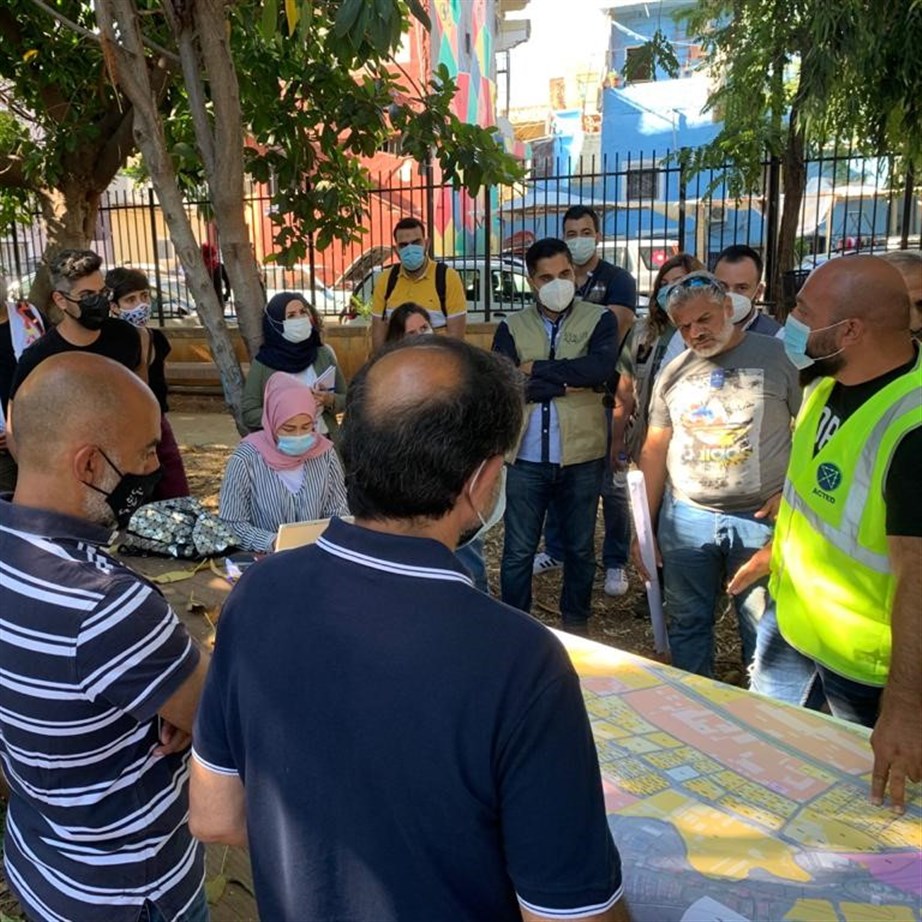 A a general meeting with residents and all NGOs/INGOs involved in Karantina to improve relief, repair, and recovery efforts (Photo: Mona Fawaz) 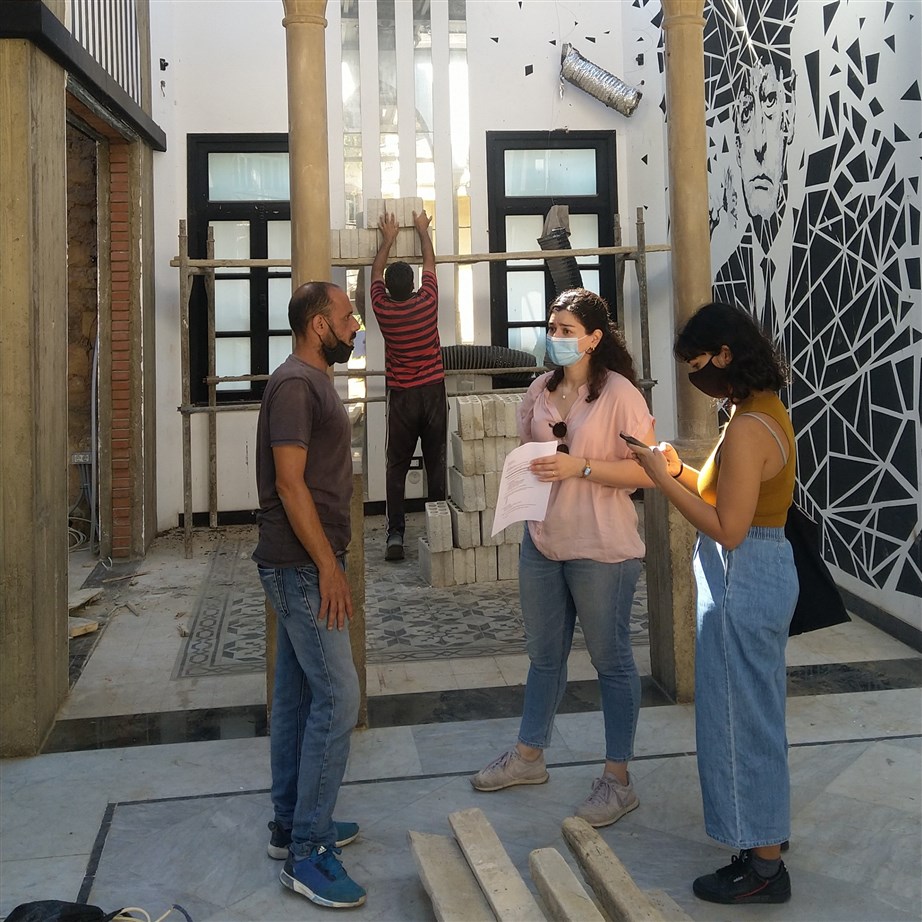 Visioning the City in the Post-Blast Period

In addition to the neighborhood-scale approach, the Beirut Urban Lab has called on colleagues, academics and professionals, including many living and working abroad, to contribute to the visioning of the city’s recovery at multiple scales. This visioning exercise will address the connection of the city to the port—given the changing role of the port piers in the past decades, the connections between various neighborhoods of the city, particularly the severed historical core and the historically isolated Karantina to other areas, and the several urban projects for the city that were developed for the municipality over the past decade such as the Plan Vert, the Soft Mobility Plan, in addition to the notorious proposed Fouad Boutros Park (replacing the Highway), where the partially expropriated trajectory presents an extraordinary opportunity for the neighborhoods affected by the blast.

The "Fouad Boutros highway" area was expropriated by the government and then abandoned after protests by activists, residents, and professionals (Photos: Dounia Salamé)