Is Lebanon Becoming Another “Republic of the NGOs”? 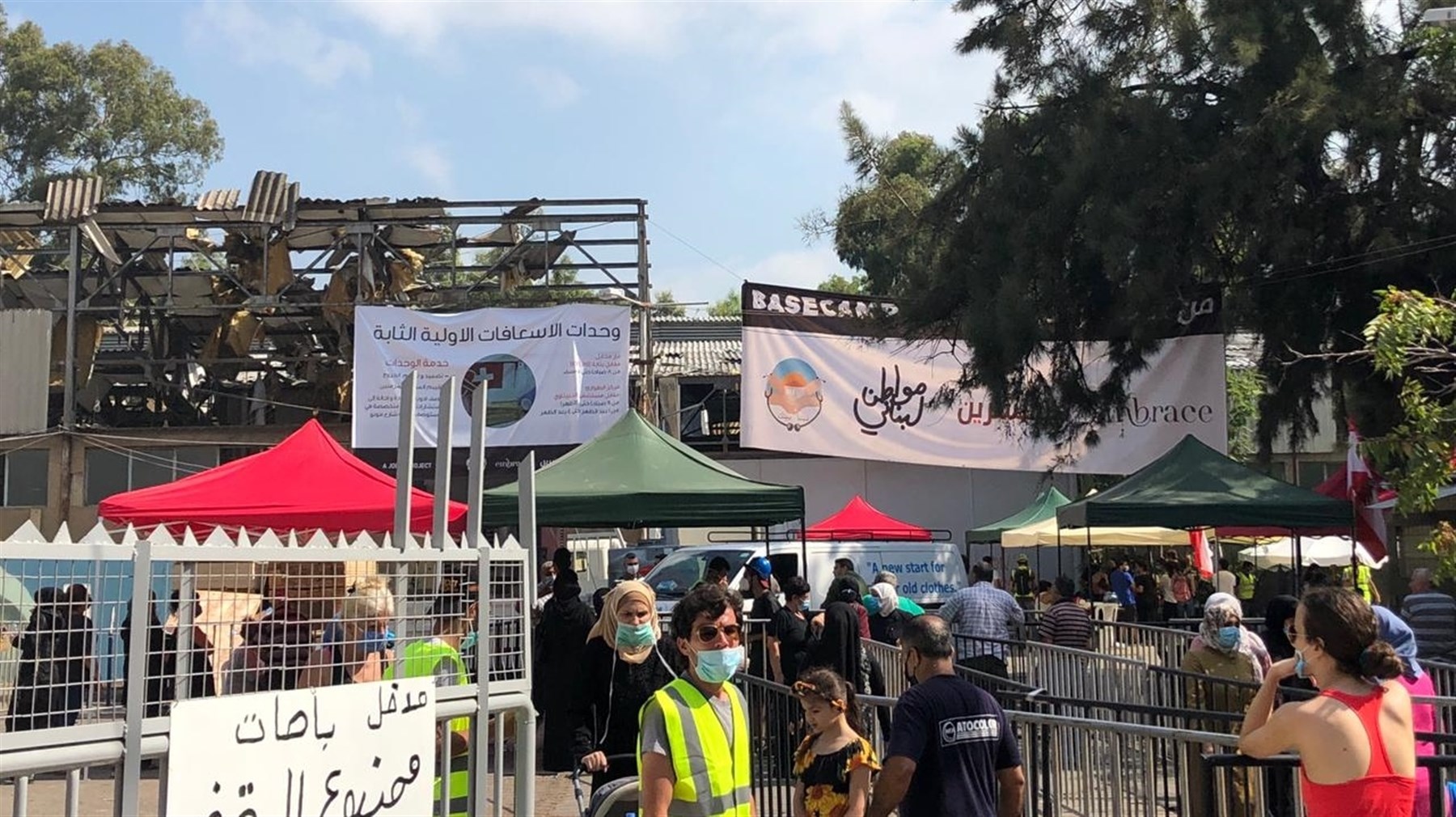 Understanding the Context: The Anti-State Rhetoric

Almost a year after the outbreak of the October 2019 uprising in Beirut, and amid a devastating financial meltdown generated by the deep corruption of Lebanon’s ruling elite, the port explosion came to consecrate what many described as a war waged against Lebanese citizens by the country’s political class.2,3 Anger mounted, and even those who cling to the traditional political class for protection because they fear their position as minorities in a volatile regional context can hardly ignore the responsibility of a governance body that knowingly tolerated the callous storage of explosive material in close proximity to people’s homes.4In this context, the ubiquitous rhetoric among mobilized activists, organized groups, and political initiatives is to exclude the corrupt Lebanese political class and all its appointees in public agencies from the reconstruction process.5 This position was rapidly echoed by the international community as well as by many donors and INGOs who discussed the deficit of trust and the possibility of bypassing public agencies in recovery work.6 Since rampant corruption has been widely exposed and associated with the financial collapse, it is inconceivable, the argument goes, to trust state agencies with the funds earmarked for the reconstruction of the devastated districts. The argument is not built on thin air. On the one hand, the pile of evidence regarding mismanagement, widespread theft, and notorious practices that have largely voided public agencies—including those at the Port7—of either competence or representation make the exclusion of public agencies from recovery a logical step.8 On the other hand, the idea that a reconstruction project would not be channeled through state institutions has several precedents in Lebanon. One can see its most recent and eloquent materialization in the post-2006 war reconstruction of Lebanon’s villages and Beirut suburbs, particularly the district of Haret Hreik. Over 220 multistory residential and commercial buildings were entirely rebuilt by Waad, the private agency set up by Hezbollah, using foreign donations transited through the Higher Relief Council (HRC) that was established by the government at the time as well as money raised directly by the party.9 Elsewhere in South Lebanon, donor agencies established their own headquarters where they managed recovery, often without coordination with public agencies.10 Conversely, while one may recall the post-2006 war reconstruction as a relative success story in that it restored people’s access to their homes, unlike the post-civil war recovery, that process led to the further entrenchment of communities as protected constituencies of specific political groups. These factors added to the splintering of Beirut and the enclaving of its southern districts. Similarly, global experiences in which the national state was sidelined for corruption or incompetence have generally not been successful in securing adequate recovery. The experiences of Haiti (now notoriously dubbed the Republic of the NGOs 11) Iraq, Yemen, and others have left populations bruised, increasingly divided, and hostage to specific bodies that secured their own survival but undermined, in the process, the possibilities for communities to come together as political collectives capable of managing their affairs—in other words, the process of state building. Is there room to consider that Lebanon’s experience today may provide evidence to the contrary? If the state is to be excluded from recovery, can NGOs, INGOs, and activist community groups be entrusted with Beirut’s recovery? What mechanisms are available to them?

Which Organizations Are Participating in Beirut’s Reconstruction?

Where Is the State?

More than two months after the horrendous blast that devastated one third of Beirut, and despite powerful demands for accountability from activists, widespread condemnation of the political class, and admirable efforts by individuals across the religious, class, and professional spectrums, it is hard to discern a recovery process at present that aims for social justice and accountability. Neither is the bottom-up approach of activists, NGOs, and syndicates providing sufficient certainty, nor is the top-down takeover of the army and the consequent militarization of the process encouraging. The answer to the question of whether Lebanon can offer a promising example of a recovery, one that is conducted without public agencies, is a resounding and probably unsurprising, “no.”The public response and the record of public interventions provide dismal expectations for a state-led recovery. In this context, and to counter the army-INGO tandem that seems to impose itself as the main option, activists and professional unions have to carry the huge burden of demonstrating their capability to monitor works, generate accountability, and support residents in taking charge of their districts—enormous responsibilities to undertake in these dire times of compounded crises, with no end in sight. Still, attempts—even small ones—to salvage any pieces of the state so it is functional, should not be spared. Such efforts may sow the seeds for the desired state building that would preferably be developed inclusively from the bottom up by the Lebanese people as the country seeks to extricate itself from its current troubles.1 Christopher Kim, et al., “The Effect of Social Capital on Community Co-production: Towards Community-oriented Development in Post-disaster Recovery,” Procedia Engineering, Vol. 180, 2017, 901-911.2 See, for example, Walid El Houri, “Lebanon’s Deadly Blast: When Corruption Turned into Carnage.” Open Democracy, 8/7/2020, https://www.opendemocracy.net/en/north-africa-west-asia/lebanons-deadly-blast-when-corruption-turned-into-carnage/ (accessed 10/05/2020).3 For an assessment of damages, see The Beirut Rapid Damage and Needs Assessment, published by the World Bank on 8/30/2020, which estimated the losses to 200 deaths, more than 6,000 wounded, and around 300,000 displaced.4 For six years, 2,700 tons of ammonium nitrate had been stored on the pier facing the city, less than 500 meters away from homes.5 https://www.nytimes.com/interactive/2020/09/09/world/middleeast/beirut-explosion.html (accessed 10/05/2020). Also see Mona Harb, “Quick Thoughts: Mona Harb on the Aftermath of the Beirut Explosion.” Jadaliyya, August 20, 2020, https://www.jadaliyya.com/Details/41604 (accessed 10/5/2020).6 For more, see for example, Alex Ward, “What Lebanon needs to recover from the explosion. The people of Lebanon kindly request you do not send aid money to their government.” Vox, 8/6/2020,  https://www.vox.com/2020/8/6/21357190/lebanon-beirut-explosion-aid-recovery-help, both accessed 10/5/2020.7 Reinoud Leenders, “Timebomb at the Port: How Institutional Failure, Political Squabbling and Greed Set the Stage for Blowing up Beirut.” Arab Reform Initiative, 9/16/2020, https://www.arab-reform.net/publication/timebomb-at-the-port-how-institutional-failure-political-squabbling-and-greed-set-the-stage-for-blowing-up-beirut/ (accessed 10/5/2020).8 Mohamad Bazzi, “The Corrupt Political Class that Broke Lebanon. A Decaying Sectarian System Kindled Beirut’s Port Blast.” Foreign Affairs, 08/14/2020, https://www.foreignaffairs.com/articles/lebanon/2020-08-14/corrupt-political-class-broke-lebanon (accessed 10/5/2020).9 It was done, one should recall, in flagrant violation of building and zoning regulations, and eventually legalized by the Lebanese parliament after the fact, in 2014, eight years after the war and two years after Hezbollah announced the successful termination of the project. For more on this, see Mona Fawaz, (2017) “Planning and the Making of a Propertied Landscape,” Planning Theory and Practice 18(3): 365-384; and Mona Harb and Mona Fawaz, “Influencing the Politics of Reconstruction in Haret-Hreik,” in Howayda Al-Harithy (ed.), Lessons in Post-War Reconstruction: Case Studies from Lebanon in the Aftermath of the 2006 War. London: Routledge, 2010.10 Several case studies appear in  Al-Harithy (ed.), Lessons in Post-War Reconstruction.11 Kevin Edmonds, “Beyond Good Intentions: The Structural Limitations of NGOs in Haiti.” Critical Sociology, May 2013, 39(3):439-452.12 Excluded from this overview are religious institutions (e.g., the Church of Mar Mikhael and the personal office of Iraq-based Ayatollah Ali Sistani providing relief) and political parties, whose role so far has been timid in the recovery.13 Rola Ibrahim, “Al-jaysh ‘yunassik’ faqat! Jam’iyyat majhula tastafrid bi’l-hibat” (in Arabic). Al-Akhbar, 9/9/2020, https://al-akhbar.com/Politics/293633 (accessed 10/5/2020).14 Daleel Madani’s more recently published survey of mostly local organizations lists at least 130, a sizable number particularly as it excludes most of the large-scale international organizations and UN agencies.15 Names like Arc-en-ciel, Amel, or Offre-Joie are well known to many Lebanese communities.16 Save the Children and World Vision have been in Lebanon since the 1960s/70s.17 See a full description in Mona Harb, “New Forms of Youth Activism in Contested Cities: The Case of Beirut.” The International Spectator 52(2): 74-93, 2018.18 Examples of these include Khadhet Beirut or Mintishreen.19 Initiatives like Matbakh el Balad started in downtown Beirut, feeding the poor; it has since expanded its work beyond downtown and launched a crowd-sourced funding effort after the blast. See https://www.facebook.com/matbakhelbalad/. Covering this, for example, are Kareem Chehayeb and Abby Sewell, “Local groups step up to lead Beirut blast response.” The New Humanitarian, 10/18/2020, https://www.thenewhumanitarian.org/news-feature/2020/08/18/Lebanon-Beirut-explosion-local-aid-response (accessed 10/5/2020).20 Nation Station and Barrad al-Balad are good examples of community based organizations. Nation Station started after the blast and has received solid attention and coverage for its initiatives.21 For reference, check AlMubadara, https://www.facebook.com/almubadara.drabzeen.22 “Itlaq al hay’a al-wataniyyah li’i`adat ‘i`mar Beirut,” Al-Modon. 8/20/2020.  https://www.almodon.com/society/2020/8/20/إطلاق-الهيئة-الوطنية-لإعادة-إعمار- (accessed 10/05/2020).23 The Governor of Beirut was appointed only weeks before the blast. Prior to his appointment, he was a judge and had no experience in urban planning24 For a description, see https://www.general-security.gov.lb/ar/magazines/details/77 (in Arabic) (accessed 10/5/2020).25 Research at the Beirut Urban Lab has shown that between 1999 and 2011, at least a dozen laws were issued to incentivize the flow of capital into the built environment. These include changes in property laws to facilitate the purchase of land by foreigners and reduce property registration taxes as well as changes to urban and building regulations to intensify construction and increase profit for developers. In addition, between 1999 and 2019, the Central Bank issued multiple circulars designed to ease its reserve requirements for banks investing in real estate, facilitating the provision of housing mortgages, and lifting restrictions that previously prevented banks from investing directly in real estate. For more on the topic, see Beirut Urban Lab, “Beirut: A City for Sale?”.